We as humans don’t like change. We don’t. Just look at our political situation at the moment — almost half of the country wants to “Make America Great Again” because it has changed for them and that sucks. I get that. The problem with that argument is that for a good portion of the country it wasn’t all that “Great” in the first place so going back to some 1950s (misogynistic and racist) idyll is not a worthy goal. But I digress.

On a smaller scale, we generally behave to avoid change.

Changing your life takes overcoming the fear of the unknown. We don’t typically change out of virtue; we’re usually driven to change by pain.

And while you’re in the change, you’ve left what is familiar and you haven’t yet reached the “new,” so, at times, it’s HORRIBLE.

Trust me, I know how horrible this is. Since finishing chemo and heading into “post-chemo/cancer” life, I have been living in transition. In some respects, it’s even more horrible than the transition between jobs (or houses, or locations, or whatever), because I have no idea when it’s going to end or what it’s going to look like once I get there. Because I finished chemo on October 26, 2012 and today is November 7, 2016, I’ve been living in transition for just about four years.

What have I achieved during this time?
– one surgery to remove my thymus/tumor nub
– returning to work, more or less successfully (probably less, but I don’t know if that’s my overly judgmental self-critical voice or reality)
– surprise open-heart surgery (worst surprise EVER)
– quitting my job and the professional trajectory that I had been on for the first 35 years of my life because I was so viscerally uncomfortable with my life that I couldn’t sit quietly with my own thoughts without wanting to jump out a window
– writing a book that requires significant editing before it can be published
– sitting at a table writing this blog post

Did you see what I wrote up there? The whole “I couldn’t sit quietly with my own thoughts without wanting to jump out a window” thing? That’s what forced my transition. So change was impossible for me right up until it was actually easier to live in the fear of the unknown than it was to live in my life.

I tried to push through that discomfort when I went back to work the first time, but then I had heart surgery and realized that discomfort was there for a reason. My life was not where I wanted to be taking it. I have a bunch of theories (now, two years after quitting my job) about where I want it to go, but I knew it wasn’t where I was sitting at the time.

In my case, change was forced on me. But even then I had a choice about whether to accept it. I chose to accept it, and now I live in the transition.

My story now is how to live in that transition happily. Find some level of comfort in the unknown. Keep my death-grip on control to a tiny portion of my day. As a result, I’m forced to live more in the present. Which, if you follow indiginous teachings, is where we find spiritual nirvana. Nirvana is not yet found, but the practice of living in the present for the last two years has found me calmer than at any point in my 37 years on this planet. Which, for me, is a win.

Photo by Ales Krivec on Unsplash 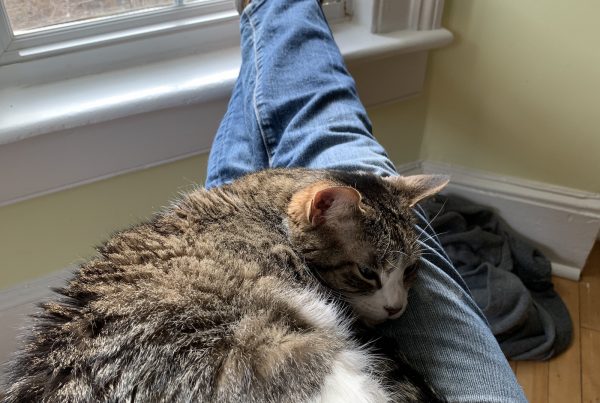